About two years ago when I discovered downtown Lancaster, I fell head over heels in love. The eclectic shops, the diverse culinary selections, and unlimited art shops, programs, and productions. This week, I wanted to fill you in on some history about Lancaster and one of America’s oldest running theaters, The Fulton Theater, as it may help you decide when you would like to book your stay here at the 1777 Americana Inn Bed and Breakfast during the holiday season. 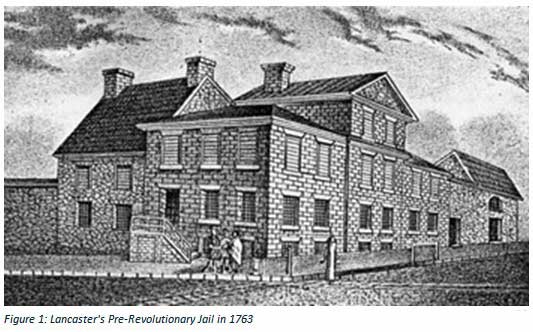 First off, the Fulton Theater was not always a theater, in fact it was a pre-revolutionary war prison. While the prison was among the first of its kind here in America, the building’s claim to fame came on one fateful December night in 1763. The story goes that during the holiday season in Lancaster in 1763, the sheriffs, politicians, and high society planned a large gala to be held on December 27th and during this gala the prison and surrounding areas were unfortunately left guarded by an unexperienced skeleton crew. While the gala was proceeding in the northern end of town, the remaining members of the Conestoga Indian tribe, who had taken refuge in the Lancaster prison, were woefully slaughtered by an infamous vigilante gang called the “Paxtang Boys.” Now, this story has been documented via “whisper down the alley” style over the years and some believe it was a conspiracy of the higher rank members of society to slaughter the problematic neighbors and gain their tribal land. Others believe, the “Paxtang Boys” acted by themselves and Lancaster merely just reaped the reward of this rebel gang, who were later killed by members of the Iroquois tribe. Not the best history, but history none the same and today when you visit the Fulton the story of the Conestoga Massacre remains, commemorated by the original prison wall and plaque found on Water Street.

So onto the more pleasant history of the building, after its use as a pre-revolutionary prison, the structure was destroyed (minus the back wall) and in its stead, a beautiful and grand opera house was built in 1852. The structure was designed by Philadelphia architect Samuel Sloan and today is “the oldest operating theater in the United States.” Named for Lancaster’s favorite son, Robert Fulton, the theater is now only 1 of 8 listed as a National Historic Landmark and remains in use by the Fulton Opera Theater Foundation today. Now, when you visit the Fulton at first glance in the middle of the North Prince street, it doesn’t appear to be that grand…but if you step inside, the majesty of this opera house becomes blatantly clear. Adorned with gold trimming and over 1300 seats, the Fulton Theater impresses from architecture to production. Since becoming a theater, the building has housed silent-movies, vaudeville shows, and now seasonal productions worthy of a Broadway stage. In 2005, the theater underwent a 9.3 million dollar renovation and is now able to house over 12 different productions per year.

If you are planning your trip to the 1777 Americana Inn Bed and Breakfast this holiday season, you can find your tickets for Fulton productions such as The Addams Family, Elf the Musical, A Christmas Carol, and Legally Blonde at http://www.thefulton.org/calendar/ . Shows sell out fast, so book your room and show tickets as soon as possible.
Visit the “Plan your visit” page for dining and parking recommendations as well!

Combined Rating
4.9
Based on 109 reviews

1777 Americana Inn Bed & Breakfast
5.0
Matt M.
08:01 04 Apr 22
Stayed there 2 nights for a weekend getaway for our Birthdays. Stayed in the Tranquility Cottage. Bed was comfortable and slept well. Tub great to relax in....
Ade B.
20:41 01 Jul 21
A weekend getaway with my girlfriend at the Americana Inn Bed & Breakfast was a 5 star experience! My room was called The Patriot Suite and had 3 levels....
Shannon G.
07:10 08 Nov 20
This is our second time visiting the B&B and definitely not our last! The owners are kind and down to earth and easy to chat with. The breakfast both...
Matt K.
19:44 28 Oct 20
My girlfriend and I stayed here and visited Black Forest Brewery onsite. We couldn't have had a better experience. The owners were both friendly and gave us...
Ian S.
07:34 18 Feb 20
A wonderful and special getaway which we couldn't have enjoyed more. We stayed in the Tranquility Cottage, separate from the main building, on Valentine's...
Karen A.
07:46 27 Sep 18
The 1777 Americana Inn is a true jewel. We were made to feel completely comfortable. The Inn is beautiful. The food outstanding and the hospitality...
Kristina C.
09:28 22 Jan 15
This was my first B&B experience in this area and they did not disappoint. My husband put the weekend together as a surprise and the owners were so...
See all reviewsWrite a review
powered by